“The A7V heavy tank devastates the battlefield with its large main gun and deploys riflemen when it is destroyed in combat!”

The A7V Tank is an Event Troop from Events, Chest or Sales that can be used as Troop Tactics. 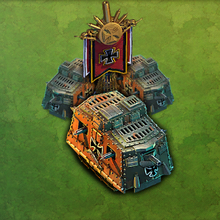 During World War I, the Sturmpanzerwagen A7V was the only homegrown German tank to see combat. The A7V was created by combining the tracks from the Holt tractor with the firepower of various Belgian, British, and Russian 57mm field guns. Additionally, it was equipped with six MG08 machine guns. Each field gun and machine gun on the tank required at least two soldiers to operate effectively. In addition to its weapons’ personnel, the A7V had a steering and engineering crew, resulting in as many as 25 soldiers being crammed inside this behemoth while on the battlefield.

Germany ordered 100 A7V’s to be built by the end of 1917. However, only 20 were produced; the German army fielded significantly more tanks that had been captured from the British and French. The A7V’s large crew, top-heavy design, excessive armor, narrow track base, and slow speed were at the forefront of its design flaws. The Mephisto, abandoned by its crew during the Battle of Villers-Bretonneux during the first tank-on-tank combat in history, is the only A7V still intact today. It was recovered by British and Australian troops and is currently on display at the Queensland Museum in Australia.

Retrieved from "https://dominations.fandom.com/wiki/A7V_Tank?oldid=44416"
Community content is available under CC-BY-SA unless otherwise noted.