“Armored vehicle that will continuously deploy troops on the battlefield.”

APC (Armored Personnel Carrier) is the sixth type of Troop from Factory to use for the player in DomiNations.

This unit deploys waves of heavy infantry onto the battlefield every few seconds. Keeps defenders at bay with machine gun fire. It is unlocked in the Atomic Age.

APC will deploy its common / unique Heavy Infantry troops depending on their nation and age (2 per surge). The Heavy Infantry level depends on APC Level, while the Boosts / Bonuses Hitpoints or DPS depend on your Barrack's Heavy Infantry Boosts received. After deploying 6 troops, it will only deploy more troops once the troops it has deployed previously have already been killed / terminated by the opponent (Can simply be described as an attack garrison).

This quick deploymemt of troops makes it harder for defenders to kill the APC. The major advantage of the APC compared to 6 Heavy Infantry trained at the barracks is not just the additional damage from the APC, but the fact that the APC does not rely so much on a supply truck as fallen Heavy Infantry are simply replaced.

The fact that Heavy Infantry has very low range typically results in the Infantry being in front of the APC, which means Heavy Infantry will also save the APC from mines in most cases.

Heavy Infantry from APC lost during battle will not count towards lost troops. 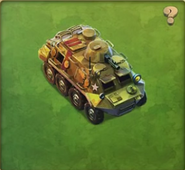 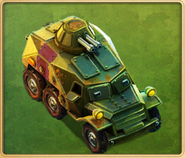 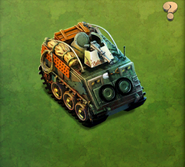 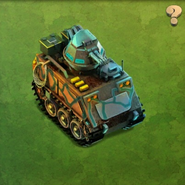 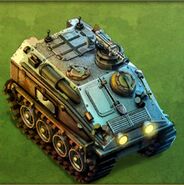 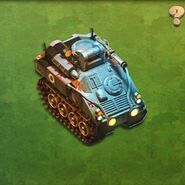 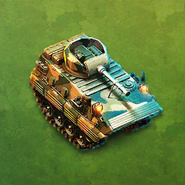 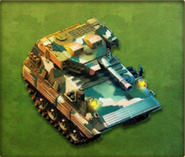 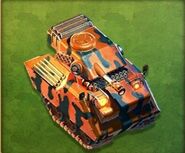 APC Mk.9
Add a photo to this gallery 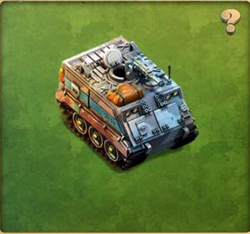 The Mobile Forces Technology at the Library confers these bonuses to the APC:

The research of Sally Ride in the University confers the following bonuses to the APC:

The research of Empress Wu Zetian in the University confers the following bonuses to the APC:

The Versailles wonder confers these bonuses to the APC:

The Brandenburg Gate wonder confers these bonuses to the APC:

Retrieved from "https://dominations.fandom.com/wiki/APC?oldid=55314"
Community content is available under CC-BY-SA unless otherwise noted.