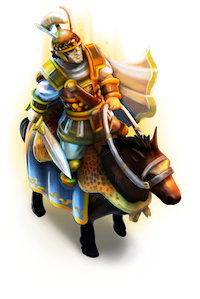 Along with Cleopatra and Joan of Arc, Alexander is one of the three Generals unlocked when you first build the Castle in the Medieval Age. After level 21 these Generals will ride in tanks and have 3 range.

"Alexander the Great (356-323 BCE) inherited the kingdom of Macedon from his father, Philip, at the age of twenty. After subduing Greece, he then embarked on the conquest of Persia, which led him through Asia Minor, North Africa, Asia, and into the Indian subcontinent.He was turned back at the river Beas in present-day Pakistan due to his army being homesick. Alexander was a master of combined-arms warfare, fixing the enemy in place with his phalanxes and then leading his brilliant 'Companion Cavalry' on daring flanking maneuvers against the pinned foe. By the time of his death at the age of 33, Alexander had created one of the largest empires in history."

General stats here are without Library and Wonder benefits.

Retrieved from "https://dominations.fandom.com/wiki/Alexander?oldid=52767"
Community content is available under CC-BY-SA unless otherwise noted.