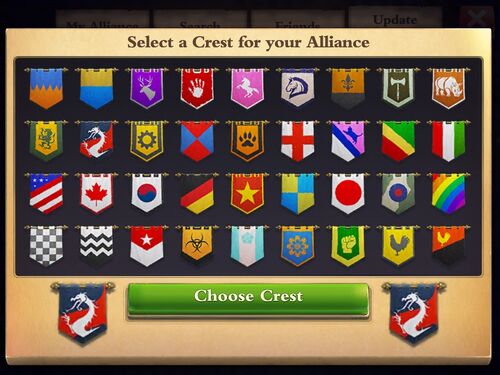 Alliances are groups of players who can chat and exchange Troops amongst each other. Alliances are an optional feature in DomiNations, unlocked by repairing the Alliance Gate for 30,000 Food in the Iron Age.

Access Alliance features from the "Chat" button on the left side of the main screen, or from the Alliance Gate itself.

As in the Version 3.0.150 update, a World War was introduced and allows a war between two Alliances with a global scale with a minimum of 10 vs 10 up to a 50 Vs 50. Refer to the main article : World War for more information.

Alliance members can also issue Friendly Challenges to have allies test their base's defenses, or share a Replay from a PvP battle.

Create an Alliance at a cost of 50,000 Gold. Beware because sometimes, the Alliance will not be created but will still consume the amount of Gold spent. A message will appear saying that the request could not be pended.

Join an existing alliance for free by Browsing Suggested Alliances or searching for an Alliance by name.

The leader of an Alliance can change its basic settings: description, minimum medal requirement, open membership or invite-only, and language. The leader has all rights of the lower roles and can (de-)assign co-leaders.

Co-Leaders have all the powers of Council. Next to that they have the ability to start a World War, post messages to the inbox, and promote members to Council or demote them to ally.

Council members can promote or kick any lower-ranked "ally" member. You can also accept or decline requests to join the alliance if it is set to invite only.

An ally is a regular member of an Alliance.

Troops may be exchanged amongst Alliance members by requesting and donating.

Request Troops from the Alliance chat window, the Alliance Gate, or the Town Center. When Troops are received, a message will flash on the screen indicating the donor and type of Troops. The maximum number of Troops that can be requested depends on the level of your Alliance Gate (see linked page for more info).

Donate Troops in the Alliance chat window by tapping on requests. Each player can donate up to 6 Troops per request(Not troop space, but 6 of any donatable Troop).

Alliance Troops are used in battle like Mercenaries--all units are deployed from one drop and don't return to base afterward.