The Atomic Age is the eleventh age in DomiNations. It is reached by paying 9,000,000 gold in the City Center whilst in the Global Age, takes 12 citizens and 12 days to complete. This age is preceded by the Global Age and succeeded by the Cold War Age. This is the third age that Big Huge Games added to the game after the Industrial Age and the Global Age, and the first age Big Huge Games added that wasn't planned from the beginning of the launch of DomiNations. The age roughly takes place between the mid 1950s and the late 1970s. It largely concerns the development of nuclear arsenals as well as developments in jet aircraft.

The advent of nuclear weaponry, first utilized by the Americans against Japan in 1945, led to many nations developing their own nuclear arsenal. The Soviet Union was the second nation to develop nuclear weapons, testing their first in 1949, followed by the United Kingdom who tested their first nuclear weapon in 1952. France and China followed suit, developing weapons during the 1960s. These 5 states are categorized as permanent members of the UN Security Council's NPT.

Tensions Between the Superpowers[edit | edit source]

The second world war left the United States and the Soviet Union as two superpowers with vastly different economic and political strategies, and the influence that one may gain over the rest of the world was enough to cause intense military and political tension. Such tension led to great fear of communist infiltration in the United States and allied states, epitomized in the policies of U.S. Senator Joseph McCarthy and 'McCarthyism'. This was a period lasting between 1950 and 1956 categorized by oppression of suspected communists in the United States and fear-mongering of communist infiltration in American business and Government. The term has since been used to refer to the practice of making accusations of treason or subversion without evidence.

Several large-scale international incidents occurred during this period, with some being referred to as points at which the world came closest to an all-out nuclear conflict. The largest of these was the Cuban Missile Crisis of 1962, where the Soviet Union secretly installed ballistic missile sites in Cuba, in response to American Jupiter missiles in Italy and Turkey and to the failed overthrow of the Cuban government by American-backed military group Brigade 2506. American spy plane flights gathered evidence of the development of offensive missile sites in Cuba, and led Kennedy to propose a naval blockade of Cuba using the United States Navy. Uncertainty over whether this would lead to international nuclear conflict meant many countries put their armies on standing alert, ready for quick deployment.

Recognized by many historians to have begun in 1947 and ending in 1991 (with the dissolution of the Soviet Union), the cold war gets its name sake from the fact that no direct fighting ever occurred between the United States and the Soviet Union, but this period was marred by enormous political and military tension, the stockpiling of nuclear weaponry by many countries, the development of conventional military technologies, proxy wars supported by the two sides, and rivalries in technological competitions such as the Space Race.

After advancing to the Atomic Age, players are given a new set of buildings to build & upgrade, technologies to research, and units to create (Attack Helicopters and APC).

In the armory, you can upgrade the Assault Infantry (Volksgrenadier if Germans, Kazoku if Japanese, Royal Alpini if Romans) to the Elite Infantry (Bundeswehr if Germans, JSDF Soldier if Japanese, Friuli Infantry if Romans), the Submachine Gun (King's Royal Rifleman if British, Long March Infantry if Chinese, Liberation Infantry if Koreans) to the Veteran SMG (Green Jacket Rifleman if British, People's Rifleman if Chinese, Republic Rifleman if Koreans ), the Heavy Motorcycle Raider to the (Veteran Motorcycle Raider), the Battle Tank (S-35 Tank if French, Hellenic Tank if Greeks) to the Main Battle Tank (ARL-44 Tank if French, Centaur Tank if Greeks), the Combat Engineer to the Veteran Combat Engineer, and the Heavy Supply Truck to the (Supply Convoy). From the Airstrip, you can also upgrade Fighters to (Strike Fighters) and Bombers to (Heavy Bomber).

Two MiGs and a B-52. Two of the many aircraft created during the Cold War. 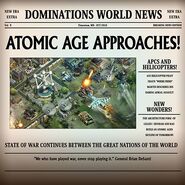 News of the upcoming Atomic Age.

Poster of the Atomic Age
Add a photo to this gallery

Before it happens, we have tested a few pictures and unit ingame. However, only few of them are used in the future. You can view some pictures below for reference. 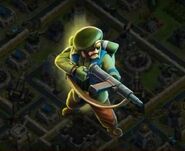 Heavy tank in the future (its based from T-54, a medium tank)

Supply Convoy
Add a photo to this gallery

Add a photo to this gallery

Retrieved from "https://dominations.fandom.com/wiki/Atomic_Age?oldid=57505"
Community content is available under CC-BY-SA unless otherwise noted.