“This pair of howitzers deal massive damage to enemy buildings at long range.”

The Big Bertha is an Event Troop from The Thunder of Cannons Event, Chest or Sales that can be used as Troop Tactics. 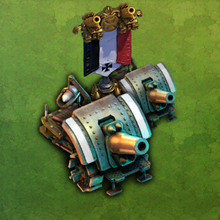 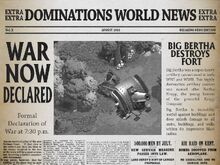 The Great War in popular imagination consists of waves of infantry going “over the top,” jumping out of trenches to attack across no-man’s land where they were mown down by enemy machine-gun fire. However, nearly two-thirds of all combat casualties in the war were caused by artillery - a random, impersonal weapon that could atomize a man with a direct hit. Of all the artillery pieces of the war, the German 42cm Minenwerfer-Gerat inspired the most fear. Its first role in combat was the destruction of Belgian forts blocking the German advance in the early days of the war, but the “Minnies” also saw extensive service during the bloodbath of the 1916 Somme Offensive. The Germans nicknamed the gun ‘Big Bertha’ after Bertha Krupp, the daughter of the Minenwerfer-Gerat’s creator. This nickname stuck as newspapers ran with it and circulated stories of how powerful this new artillery howitzer was.

Retrieved from "https://dominations.fandom.com/wiki/Big_Bertha?oldid=45421"
Community content is available under CC-BY-SA unless otherwise noted.