“This member of the Big Red One uses a three shot burst rifle to deal high damage to a single enemy at a time.”

The Big Red One Rifleman is an Event Troop from Events, Chest, or Sales that can be used as Troop Tactics. 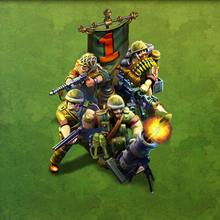 The 1st Infantry Division of the U.S. Army was organized in 1917 when President Woodrow Wilson promised to send a division to aid France in World War I. The American army did not actually have any divisions at the time, so the 1st was formed out of four infantry and three artillery regiments. Its inaugural victory over the Germans at Cantigny gave fresh hope to the Allied forces and dispelled any notion of American weakness.


The division came to be known as ‘Big Red One’ due to the conspicuous numeral adorning its soldiers’ uniforms. In World War II, it participated in the second amphibious invasion of Sicily and the storming of Omaha Beach on D-Day. It also captured Aachen, making that the first major city in Germany to fall. By the end of the conflict, it was the most decorated division in the U.S. Army, with 16 Medal of Honor recipients.


After the war, Big Red One was the only American combat force to remain in Germany. Its men remained there until 1955, first as occupiers and then as a retraining force under NATO. While its presence in Germany caused it to miss the Korean War, the 1st has otherwise participated in every major American conflict since its inception.

Retrieved from "https://dominations.fandom.com/wiki/Big_Red_One_Rifleman?oldid=46493"
Community content is available under CC-BY-SA unless otherwise noted.