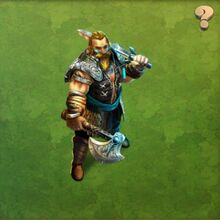 “When deployed, troops can earn additional National Trade Goods. These bonuses increase as Björn gains levels. Björn can only level up with Ironside Upgrade Manuals.”

Björn Ironside is unlocked after upgrading the VIP to level 1 in VIP Store. It can only be upgraded via Ironside Upgrade Manuals bought at VIP Store.

According to medieval sources, Bjorn Ironside was the son of the great Viking chief Ragnar Lodbrok. His nickname alluded to his toughness as a warrior and ability to survive battles unscathed. Along with his brothers he is said to have led raiding expeditions all along the coasts of Europe in the 9th century CE. In one notable feat, they sailed to Britain and avenged their father's death in a snake pit at the hands of the Northumbrian king Aella.

In the Mediterranean, Bjorn showed his cleverness in capturing the Italian town of Luni. He let it be known that he had died just after converting to Christianity so the bishop would allow his 'corpse' to be carried in for a Christian burial. Once inside, the Vikings let the still-alive Bjorn out, fought their way to the gates, and opened them for the rest of the army.

Bjorn supposedly inherited the kingship of Sweden from his father and passed it on to his son. This legendary dynasty is known as the house of Munso after the island where Bjorn's grave is claimed to have been found. The sources for his life are scanty and conflicting, and it's possible that he never existed at all or that he represents an amalgamation of multiple figures. But his dynastic line did yield the first generally accepted historic king of Sweden, Erik the Victorious. Thus, the life of Bjorn Ironside occupies an important threshold between history and legend

General stats have no Library and Wonder benefits

Retrieved from "https://dominations.fandom.com/wiki/Björn_Ironside?oldid=55886"
Community content is available under CC-BY-SA unless otherwise noted.