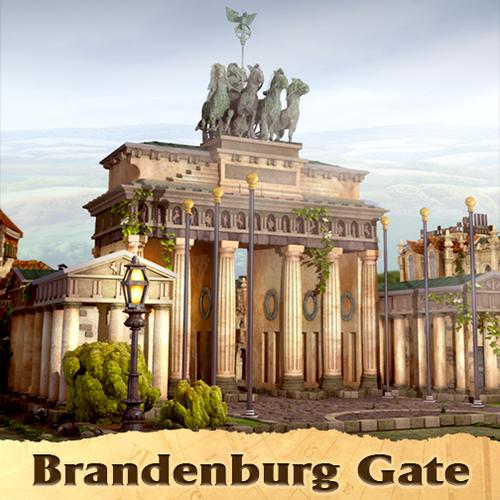 “The Brandenburg Gate was built in Berlin between 1788 and 1791. Its design was based upon the Propylaea, the gateway to the Acropolis.”

The Brandenburg Gate is one of four wonders unlocked in the Industrial Age.

Originally constructed for peace, the Brandenburg Gate has symbolized many things over the years - triumph, division, and finally freedom.

The Brandenburg Gate is a triumphal arch in Berlin. It was constructed in 1791 by King Wiliam Ⅱ of Prussia as a sign of peace. It was nearly destroyed in World War Ⅱ, and was cut off from redn access by the Berlin Wall during the Cold War. Constructed in the neoclassical style, the Gate features 12 columns and is surmounted by the 'Quadriga,' a statue of the goddess of victory driving a chariot of four horses. Napoleon stole the statue when he occupied Berlin in the early 19th Century; the Prussians stole it back when they captured Paris 14 years later. At last check the statue remains in Berlin.