“This Heavily armored knight fights alongside a brother in arms and has high hitpoints and damage. This unit deals bonus damage to enemy troops.”

The Brother in Arms is an Event Troop from the Forged in Fire: Knightly Pole Axe Event that can be used as Troop Tactics. 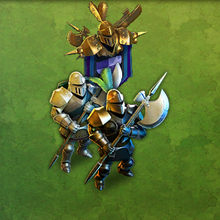 While references to the Brotherhood in Arms agreement are not well-documented, the chivalrous vow has been accepted among many literary scholars. To become brothers in arms, two high-ranking members of the knightly class would vow support to each other in all cases except for duties owed to the crown.

The vow was a mutual agreement. Gains and burdens could be shared between the knights and it was expected that the two could call upon one another in times of need.

Retrieved from "https://dominations.fandom.com/wiki/Brotherhood_in_Arms?oldid=44405"
Community content is available under CC-BY-SA unless otherwise noted.