Buffalo Soldier is an event troops from Events, Chest or Sales that can be used as Troop Tactics. 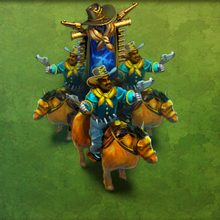 Buffalo Soldier is a type of Heavy Cavalry that seeks and destroy enemy defensive buildings. Like the old wild west, these troops rush in on horseback wielding 2 pistol. They move faster than ordinary heavy cavalry and has a long range but cannot shoot over walls.

The Buffalo Soldier was introduced during the 2018 Summer for Ages event. This troop can be obtain through in game sales and opening the Summer Chest.

The Buffalo Soldiers were the first African-American peacetime regiments created by Congress as a part of the U.S. Army. The 9th and 10th cavalries were created first, and these divisions were later expanded into the 24th and 25th regiments. The Buffalo Soldiers also built roads, protected mail carriers, escorted stagecoaches and wagon trains, and captured thieves; while racial discrimination resulted in the soldiers using inadequate weapons, supplies, and aged horses. From 1867 1896 they fought on the western frontier primarily against Native Americans during hostile situations. Buffalo Soldiers also searched for Pancho Villa, fought in the Spanish-American War, were the last segregated unit to see combat when the 24th regiment fought in the Korean War, and the Buffalo Soldiers even worked as rangers in the Yosemite and Sequoia national parks.

President Harry Truman issued an executive order that eliminated racial segregation of the military in 1948, which disbanded the Buffalo Soldiers. The last all African-American regiments disbanded during the 1950s. Many Buffalo Soldiers received the highest and most distinguished honor in the United States military, the Medal of Honor, for their service.

Retrieved from "https://dominations.fandom.com/wiki/Buffalo_Soldier?oldid=46043"
Community content is available under CC-BY-SA unless otherwise noted.