Deploys Humvees and Airborne Infantry, Damages and suppresses all nearby enemies

“The massive CH-53E Super Stallion drops anti-tank Humvees into battle while damaging and suppressing all nearby enemies. When the Super Stallion is destroyed,it deploys a large wave of Airborne Infantry.”

The CH-53E Super Stallion is an Event Troop from Events, Chest or Sales that can be used as Troop Tactics. 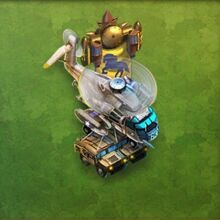 The Sikorsky CH-53E Super Stallion is the main heavy-lift helicopter used by the United States Marine Corps. It can travel 1,000 miles in just over five hours unburdened, or 50 miles carrying 16 tons of cargo. A probe allows the chopper to refuel mid-flight for even greater operational range.

Though primarily used for transport, the Super Stallion is equipped with machine guns and a chaff-and-flare dispenser for self-defense. Its normal operating crew includes two pilots and three gunners, and it is capable of bringing 37 soldiers into combat zones. Other typical paylo ads include supplies, heavy weapons, and even aircraft or light armored vehicles.

Sikorsky took more than a decade to develop the Super Stallion. The Marines first called for a heavy-lift helicopter that could deploy from amphibious assault ships in the late 1960s, and it was not until 1981 that the model was ready for action. The craft has since proven its worth in Somalia, Lebanon, Afghanistan, and Iraq, though a replacement called the King Stallion is currently in the works. Aside from the Marines, operators include Japan and the U.S. Navy, whose MH-53E Sea Dragon variant serves as an aerial minesweeper.

High damage against troops and buildings

Deals low damage against the Town Center, Vulnerable to area of effect damage

“Fearless infantry that jump out of aircraft into enemy territory to destroy enemy buildings.”

The Airborne Infantry is an Event Troop spawned or deployed from CH-53E Super Stallion.

Not long after aircraft were first introduced into warfare during World War I, creative military minds began to think about dropping infantry out of the sky. Billy Mitchell, head of the U.S.Army Air Service, planned to paradrop troops behind German lines in February 1919, but his schemes were scotched after the armistice in November 1918. Several nations trained airborne divisions during the interwar period, including the Soviet Union, Germany, and Italy.

World War II was the paratrooper's heyday. In 1940 the Germans launched successful airborne invasions of Norway, Denmark, and Crete, though steep losses on Crete persuaded them not to mount such an attack on Britain. Allied paratroopers proved their worth on D-Day but were sent 'a bridge too far' two months later during history's largest airborne assault, the failed Operation Market Garden. While the advent of helicopters in the postwar period has decreased the importance of paratroopers, they remain a valuable tool in the modern tactical arsenal.

These Humvee's Stats will be the same as Humvee as its own Troop Tactics Stats with the same Level of CH-53E Super Stallion.

Retrieved from "https://dominations.fandom.com/wiki/CH-53E_Super_Stallion?oldid=51773"
Community content is available under CC-BY-SA unless otherwise noted.