The Captain Rickenbacker is an Event Troop from Events, Chest or Sales that can be used as Troop Tactics. 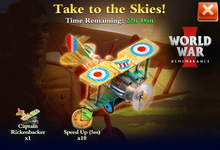 Captain Eddie Vernon Rickenbacker was an American fighter ace during World War I, achieving 26 aerial victories throughout his career. These victories, combined with his numerous awards and medals, made him the most successful American fighter pilot during the war. In 1917, when the United States declared war on Germany, Rickenbacker enlisted in the United States Army and was soon training in France. He had difficulty gaining permission to fly due to his lack of academic qualifications and was assigned as an engineering officer, where he would practice flying in his spare time. His mechanical skills were so highly regarded that his superiors tried to prevent him from attaining his wings. He did eventually earn his place among one of America’s air combat units, the 94th Aero Squadron, and shot down his first enemy plane on April 29th, 1918. Rickenbacker would go on to achieve huge success throughout the war and is one of the Americans to receive the most awards for valor during WWI.

Rickenbacker flew a SPAD S.XIII plane during the First World War, a biplane fighter aircraft usually equipped with two forward facing Vickers machine guns, replacing the single gun that was standard on earlier models. The SPAD S.XIII was based upon the highly successful SPAD S.VH and became one of the most capable fighters of the war, as well as one of the most-produced.

Retrieved from "https://dominations.fandom.com/wiki/Captain_Rickenbacker?oldid=48091"
Community content is available under CC-BY-SA unless otherwise noted.