“These Celtic war machines swiftly dash across the battlefield and hurl javelins at enemy troops!”

Celtic Chariot is an event troops from Events, Chest or Sales that can be used as Troop Tactics. First available after 6.7 Updates. 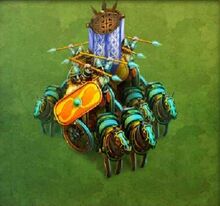 Celtic chariots were well-constructed and versatile war machines. One driver and one warrior stood in the light, two-wheeled cart pulled by several horses. The chassis was suspended by ropes for a more stable platform form which the warrior hurled his javelins while charging towards enemy forces. After wounding or killing foes from the safety of the chariot, its riders could dismount and fight on foot in close-quarters combat. The chariot could then be used to quickly retreat if its riders found themselves overwhelmed or outmatched.

Retrieved from "https://dominations.fandom.com/wiki/Celtic_Chariot?oldid=47488"
Community content is available under CC-BY-SA unless otherwise noted.