Char 2C Super Heavy Tank is one of the 2 Super Heavy Tanks introduced during the 6.7 Update (Rise of super heavy tanks). It has a unique ability of hosting a machine gun and a main gun (cannon) which fires periodically. As expected of vehicle of such size, it moves slowly and has a high dps with area of effect damage from both gun. It could also shoot over walls.

It is available as a troop tactics and could be obtain from the Hobart's Funnies Event, Chest or Sales 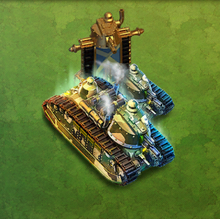 Trench Warfare brought World War I to a stalemate. In 1917, as part of the efforts to break the impasse, France started working on a tank like no other at the time, the Char 2C Super Heavy Tank. The French wanted a tank that was capable of crossing the trenches and powerful enough to break through the German Siegfried Line. The design of the Char 2C met those requirements and broke several records in the process.

The 69 ton super heavy tank, the most massive tank produced until 1943, was capable of crossing trenches as wide as 14ft, more than any other tank at the time. The tank seemed promising, but the war ended before the Char 2C could be deployed.

It was eventually used 18 years later, during World War II. Despite its age, the Char 2C was still considered battle worthy and was used mostly in defensive roles. Many nations designed and prototypes super-heavy tanks over the years, but the Char 2C was the only one in history that was deployed on the battlefield.

Editor's Note: Troop space and range for every level are the same and displayed in Infobox Troop

Retrieved from "https://dominations.fandom.com/wiki/Char_2C_Super_Heavy_Tank?oldid=51774"
Community content is available under CC-BY-SA unless otherwise noted.