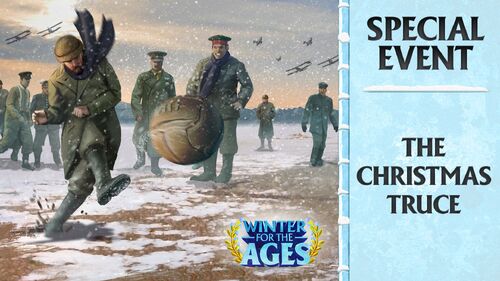 This weekend is our Christmas Truce event!

On Christmas morning, December 25, 1914, soldiers across some of the war fronts in World War I emerged from their trenches to greet one another. Throughout the day, these soldiers exchanged gifts of cigarettes, food, clothing, and kicked makeshift soccer balls.

Some soldiers used the temporary ceasefire as an opportunity to retrieve bodies that had fallen within no-man’s land, the deadly ground between the lines. While the truce occurred on multiple fronts, it was not universal. There were a few cases of soldiers attempting to greet the enemy only to be shot.

Officers on both sides would strictly forbid such future fraternization. Those regulations may have been a moot point regardless, given the increasing animosity generated by new innovations such as poison gas, strategic bombings of cities, and unrestricted submarine warfare. Industrialized warfare would destroy such Victorian-era pleasantries as surely as it would claim the lives of many of the participants of the Christmas Truce, but for one day at least, peace reigned throughout much of the Western Front.

Retrieved from "https://dominations.fandom.com/wiki/Christmas_Truce_Discount_Event?oldid=45114"
Community content is available under CC-BY-SA unless otherwise noted.