The Classical Age is the fifth age available to a player in the game of DomiNations. It is obtained by paying 100,000 gold in the Town Center. This age is succeeded by the Medieval Age and is preceded by the Iron Age.

The Classical Age is a period of time of history of a diversity of cultures, conquest, new inventions and innovations, and the foundation of Western civilization. This age lasted from 800 BC(E) to 600 AD/CE. During the Classical Age was a diversity of cultures, inventions, and innovations. The religion of Greek polytheism was created inspiring Roman polytheism. One of the most religions formed in the Classical Age that existed today are Christianity and Islam. New philosophies and governments such as democracy and republic were developed. Alchemy and mathematics also played a role in scientific education in the Classical Age. Literature was innovated and includes poems, epics, and fables. Entertainment played a role with its main focus on acting and drama. New arts were created such as architecture, mosaics, paintings, and sculptures.

Conquest also played a part in the Classical Age. To start off, the Persian Achaemenid Empire lost to Greece in the Greco-Persian Wars with the Greek tactic advantage of phalanxes. After, the cities of Athens and Sparta developed leagues with their allies and invaded each other in the Peloponnesian Wars with Sparta as the winner. Conflict grew in Greece between the city-states of Thebes, Athens, and Sparta. Macedon then capture the cities for unity and invaded Persia and Western India with success under King Philip II and Alexander III the Great. In the west, the power of Rome grew in Italy, and conquered Europe, Western Asia, and Northern Africa after defeating Carthage (Punic Wars), Iberia, Gaul (modern-day France) and Greece would be conquered under Julius Caesar. Palestine and Egypt would later be conquered by Augustus and Britannia after his death. Christianity grew in Rome after being legalized replacing Roman polytheism as the state religion.

Rome grew weak during the Late Antiquity starting at 400 AD and splitted into two factions; Western and Eastern. The Western empire (which was established in Italy and the west of it) died off being weakened by attacking Huns under Attila and was captured by barbarians such as the Germans and the Vandals. The Eastern Empire (which was established in Asia Minor and spread from Greece to the Levant) flourished becoming the now-known Byzantine Empire. The Franks in the north, at first, were barbaric but adopted Roman culture and adopted from paganism to Christianity. Muslims from the Middle East conquered lands in Egypt and Western Asia creating fear for the converted European Christians. Attacking vikings in the north created fear in the nations in Europe forcing villagers to be under the new system of feudalism. These were troubled times for the Europeans, creating the Dark Ages; the first part of the Middle Ages; or in popular terms; Medieval Age.

After advancing to the Classical Age, players are given a new set of buildings to build, technologies to research, and units to create. Buildings that are available in the Classical Age is the ambush trap, ballista tower, a catapult (from researching Chapter 3 of Machinery Technology in library), garrison, spike trap, stable, tower (from researching Chapter 1 of Watch Tower Technology in library), a set of walls, a caravan and a farm, house, a set of roads, a library, barracks and a war academy. You can receive 2 citizens from building another house. In the blacksmith, you can upgrade the hoplite (vandal if Germans, bushi if Japanese, and legion if Romans) to the phalanx (heavy vandal if Germans, samurai if Japanese, and heavy legion if Romans), the composite bowman (longbowman if British, chu ko nu if Chinese, hwarang if Koreans) to the archer (elite longbowman if British, elite chu ko nu if Chinese, elite hwarang if Koreans), the heavy horse raider to the cavalry raider, the horseman (chevalier if French, companion if Greeks) to the cataphract (heavy chevalier if French, royal companion if Greeks), and receive the wall miner. In addition, players can also construct wonders in the Classical Age to give a bonus to help the player. The choices are the Notre Dame, the Forbidden City, the Terra Cotta Army, and the Colosseum. 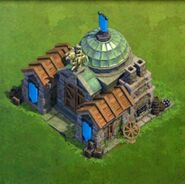 The War Academy is unlocked in the Classical Age. 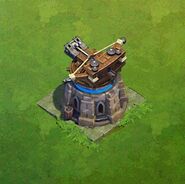 The Ballista Tower is unlocked in the Classical Age 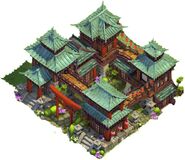 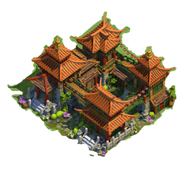 Retrieved from "https://dominations.fandom.com/wiki/Classical_Age?oldid=53310"
Community content is available under CC-BY-SA unless otherwise noted.