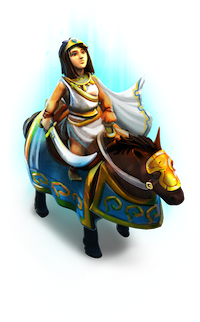 Along with Alexander and Joan of Arc, Cleopatra is one of the three Generals unlocked when you first build the Castle in the Medieval Age. After level 21 these Generals will ride in tanks and have 3 range.

"Cleopatra (69-30 BC) was the last independent pharaoh of Egypt and most famous for her tremendous success, intelligence, and allure. Initially, she rules jointly with her father, and upon his death became a joint monarch with her brother, Ptolemy XIII. After being exiled from the throne due to strained relations with Ptolemy, she aligned herself with the two most important people in Rome: Julius Caesar and Marc Antony. These relationships were as much political tactics as they were personal decisions, helping her to eventually regain power on the throne as the sole ruler of Egypt."

General stats here may or may not be without Library and Wonder benefits.

Retrieved from "https://dominations.fandom.com/wiki/Cleopatra?oldid=49594"
Community content is available under CC-BY-SA unless otherwise noted.