The Colonial Ranger is an Event Troop from Events, Chest or Sales that can be used as Troop Tactics. 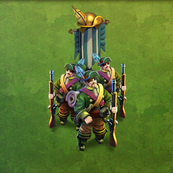 Rangers were skilled frontiersmen who served in wars between colonists and Native American tribes during the 17th and 18th centuries. They functioned like full-time soldiers and were paid by colonial governments to patrol the American frontier. During offensive missions, rangers were scouts, guides, and raiders.

In 1675, Colonel Benjamin Church established a ranger unit that mixed colonists with Native Americans. The colonists adopted combat tactics from the Native Americans, allowing them to operate in areas that traditional militias could not. Some military commanders despised the rangers due to their liberal recruitment standards and unconventional way of fighting; however, these traits made them uniquely adroit on the American frontier.

In 1755, Captain Robert Rogers recruited rangers to support the British Army in the French and Indian War. These rangers aided the British by conducting patrols through the wilderness, gathering intelligence, and raiding French outposts. They were expert marksmen, allowing them to hold off hostile natives while vastly outnumbered during the Battle of Snowshoes in 1758. When the Revolutionary War began in 1775, some veterans of Rogers’ Rangers would become leaders of militia units.

Retrieved from "https://dominations.fandom.com/wiki/Colonial_Ranger?oldid=46144"
Community content is available under CC-BY-SA unless otherwise noted.