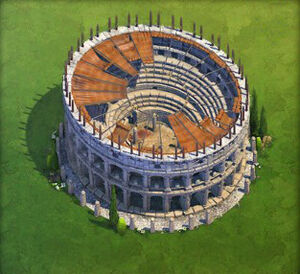 “Provides the Strength of the Gladiator power in combat once a day, increasing the effectiveness of your troops. Produces defenders when you are attacked.”

The Colosseum is one of four wonders unlocked in the Classical Age.

*Shortened to 4s with Acropolis.

**Shortened to 32s with Acropolis.

The Colosseum is a huge stone and concrete amphitheater standing in the center of the city of Rome. Constructed over a ten-year period beginning in 70 AD, the Colosseum was used to house gladiatorial battles, animal hunts, theatrical events, executions and other crowd-pleasing events. The largest amphitheater in the world, it could hold around 70,000 spectators. During the 'no-fun' medieval era, the Colosseum was converted into housing, complete with a church and a graveyard in the area. In 1349 it was damaged by a terrible earthquake, and much of its stone was looted to rebuild other sections of Rome, but what still remains is awe-inspiring.

The Colosseum is also a defense; proof is that it can be stopped with Sabotage and Heavy Cavalry can home to it, like other defenses.

Retrieved from "https://dominations.fandom.com/wiki/Colosseum?oldid=45304"
Community content is available under CC-BY-SA unless otherwise noted.