“Wielding huge swords, these troop attack in broad arcs, potentially cutting down many enemies at once in front of the Doppelsöldner. They deal double damage to Cavalry.”

The Doppelsöldner is an Event Troop from Events, Chest, or Sales that can be used as Troop Tactics. 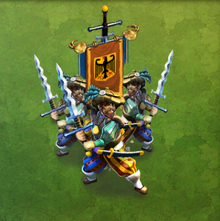 Doppelsöldner were an elite class of Landsknecht, German mercenaries widely employed during the Renaissance. Their name literally mean 'double-soldier' as they were entitled to double pay. While the pike were perferred by most Landsknehts, some doppelsöldner wielded massive two-handed sword historically called doppelhanders or bidenhanders (better known today as zweihanders). Front-line soldier used these surprisingly light greatswords to create hole in pike wall by knocking aside enemy polearms or even looping off the upsecured head of lower-quality weapons. Many bidenhanders also had secondary grips above the crossguard to allow for controlled thrusting attack as well as chopping swings

Retrieved from "https://dominations.fandom.com/wiki/Doppels%C3%B6ldner?oldid=51981"
Community content is available under CC-BY-SA unless otherwise noted.