Uses Protect on nearby allies when summoned

“When summoned, the Dutch Civil Guard uses a large Protect tactic on nearby friendly troops to shield them from damage.”

The Dutch Civil Guard / Dutch Militia is an Event Troop from the Forged in Fire: Flamberge Rapier Event that can be used as Troop Tactics. 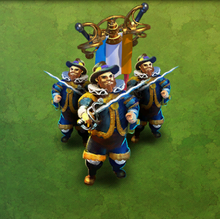 The Dutch Civil Guard, known as Schutterij, was a voluntary city militia in the Netherlands starting in the 16th century. The militia was composed of wealthy local citizens because they were expected to provide their own weapons and uniform. Officers and captains of the Guard were required to be members of the Reformed Dutch Church.

The Schutterij commonly carried ranged weapons such as crossbows and flintlock guns, as well as close range halberds and flamberge rapiers. The Schutterij were disbanded in 1901 when professional police forces were set in place. There are groups today that still perform historical reenactments to preserve the Guard’s old traditions.

Retrieved from "https://dominations.fandom.com/wiki/Dutch_Civil_Guard?oldid=44403"
Community content is available under CC-BY-SA unless otherwise noted.