Vulnerable to anti-tank guns, low damage vs. tanks and walls

The Elephant Archer is an Event Troop from Events, Chest, or Sales that can be used as Troop Tactics.

The Elephant Archer is a very powerful unit that can be obtain by opening the Ancient Chest, special events, trading with Marco Polo or Recruiting them from the Elephant Stable.

These ancient troops are specialize in taking out enemy infantries. They have a high advantage over defenders, they can shoot over walls with a long range of 5. 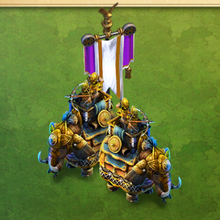 Elephants acted as a kind of heavy tank for the ancient world. When properly trained and supported, the War Elephant terrorized opposing armies from Southeast Asia to the British Isle. Writing about the Roman invasion of Britain, one contemporary historian reported that 'Caesar had one large elephant, which was equipped with armor and carrier archers and slingers in its tower. When this unknown creature entered the river, the Britons and their horses fled and the Roman army crossed over.

Elephant Archer spawning out of the Stronghold is every attacker nightmare. These troops are not classified as "defenders" when they spawn out of the stronghold. Just like Generals on defense, planes cannot take them out easily as only it dps (damage per second) applies on them.

Retrieved from "https://dominations.fandom.com/wiki/Elephant_Archer?oldid=52438"
Community content is available under CC-BY-SA unless otherwise noted.