“This nightmarish unit damages and suppresses all enemy troops in front of him. Suppressed troops deal half damage and move at half speed.”

The Executioner is an Event Troop from the Gallows Event Building, Events, Chest or Sales that can be used as Troop Tactics. 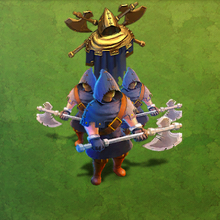 In Medieval Europe, executioners were officials who carried out death sentences and other physical punishments. The role of executioner was often passed down through family generations from eldest son to eldest son. They were feared by the public, who believed they cursed anything they came in contact with. Horror stories sprung up throughout Europe that frequently involved a protagonist dining with an executioner or mistakingly falling in love with an executioner's daughter. The executioners’ infamy led to social isolation.

Executioners took on other duties outside of capital punishment. These included the maintenance of gallows and latrines, cleaning up dead carcasses, and enforcing livestock regulations. During the late 18th century, torture and public executions began to fall out of favor, stripping executioners of their power. Executioners along with their legacies would then fade into history.

Retrieved from "https://dominations.fandom.com/wiki/Executioner?oldid=44429"
Community content is available under CC-BY-SA unless otherwise noted.