“This aggressive military commander has a persistent aura that increases the damage of nearby allied troops. He also deals high damage with his Lebel 1886 Rifle!” 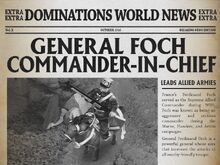 The Ferdinand Foch is an Event Troop from Events, Chest or Sales that can be used as Troop Tactics. 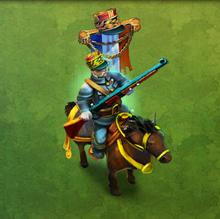 It was introduced during mid November 2018 as Troop Tactics to be purchased at Ferdinand Foch Sales.

It is the first Generals that introduce Aura that give Damage Bonus to surrounding Troops.

As Commander in Chief of the Allied Armies in 1918, Ferdinand Foch was the architect of the ‘Hundred Days Offensive’ which finally defeated Germany. Foch enlisted in the French army as a teen during the Franco-Prussian War of 1870. He rose through the ranks by proving to be an innovative military strategist, and eventually became a professor at the Ecole Superieure de Guerre military college. Foch was instrumental in developing doctrines known as the ‘cult of the offensive,’ which emphasized a relentless spirit of attack. In a war defined by trenches, barbed wire, and machine guns, adherence to Foch’s precepts led to staggering losses of life.

At the start of the war in 1914, Foch proved to be a resourceful general, particularly during the First Battle of the Marne. Fought six weeks after the outbreak of the conflict, the ‘Miracle on the Marne’ pushed the Germans back from the outskirts of Paris, with troops arriving at the front via commandeered city taxis. Had the French line broken, the war might have ended two months after it began. In March 1918, the Germans unleashed the massive Spring Offensive against the Allies, intended to break the stalemate on the Western Front before fresh U.S. troops arrived. With their forces pushed back, Allied leaders appointed Foch to coordinate their defenses. With Foch aggressively counterattacking, the German army was on the brink of disintegration by fall of 1918, leading to the Armistice of Nov 11th.

Retrieved from "https://dominations.fandom.com/wiki/Ferdinand_Foch?oldid=46509"
Community content is available under CC-BY-SA unless otherwise noted.