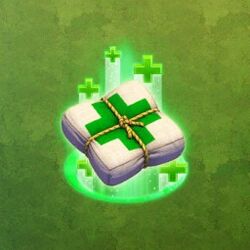 “Provides medical aid, healing your troops in an area until the supplies run out. Heals based on a percentage of a unit's max hitpoints, so it's stronger on high-health troops.”

Retrieved from "https://dominations.fandom.com/wiki/First_Aid?oldid=53801"
Community content is available under CC-BY-SA unless otherwise noted.