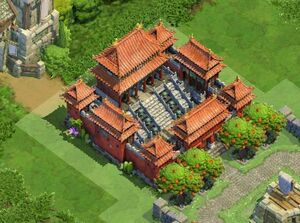 “Acts as a second Town Center during combat, making it harder for your opponent to earn a victory.”

The Forbidden City is one of four wonders unlocked in the Classical Age.

At some point, this building was flagged as a Town Center for purposes of damage reduction from Tactics and troops. Demolition, Barrage, Bombers and Transports all do reduced damage to the Forbidden City just as they do to the Town Center.

The Forbidden City (故宫) was the Chinese imperial palace from the Ming dynasty（明朝） to the end of the Qing dynasty（清朝）—the years 1420 to 1912. It is located in the centre of Beijing, China, and now houses the Palace Museum.（故宫博物院） It served as the home of emperors and their households as well as the ceremonial and political centre of Chinese government for almost 500 years.

Constructed from 1406 to 1420, the complex consists of 980 buildings and covers 72 ha (180 acres). The palace complex exemplifies traditional Chinese palatial architecture, and has influenced cultural and architectural developments in East Asia and elsewhere. The Forbidden City was declared a World Heritage Site in 1987, and is listed by UNESCO as the largest collection of preserved ancient wooden structures in the world.

Since 1925, the Forbidden City has been under the charge of the Palace Museum, whose extensive collection of artwork and artifacts were built upon the imperial collections of the Ming and Qing dynasties. Part of the museum's former collection is now located in the National Palace Museum in Taipei. Both museums descend from the same institution, but were split after the Chinese Civil War. With over 14 million annual visitors, the Palace Museum is the most visited Museum in the world.

Retrieved from "https://dominations.fandom.com/wiki/Forbidden_City?oldid=45303"
Community content is available under CC-BY-SA unless otherwise noted.