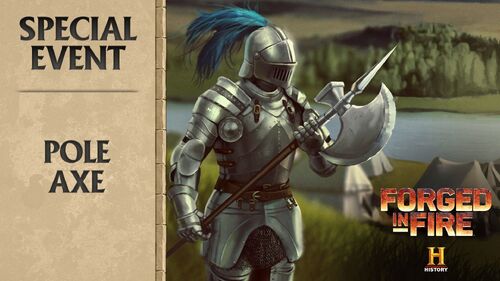 Forged in Fire is an original competition series on the History Channel. The show is hosted by weapons expert and U.S. Army and Air Force veteran Wil Willis. Each episode tests four of the nation’s most skilled bladesmiths as they craft history’s most iconic weapons. The Knightly Pole Axe, which aired on October 17, 2018, features the iconic Knightly Pole Axe.

More information regarding the Brotherhood in Arms: While references to the Brotherhood in Arms agreement are not well-documented, the chivalrous vow has been accepted among many literary scholars. To become brothers in arms, two high-ranking members of the knightly class would vow support to each other in all cases except for duties owed to the crown. The vow was a mutual agreement. Gains and burdens could be shared between the knights and it was expected that the two could call upon one another in times of need.

How effective is your medieval warfare? 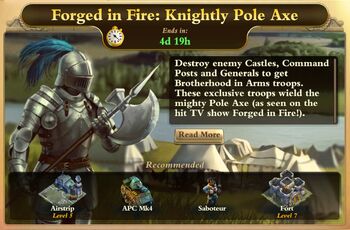 Retrieved from "https://dominations.fandom.com/wiki/Forged_in_Fire:_Knightly_Pole_Axe?oldid=42847"
Community content is available under CC-BY-SA unless otherwise noted.