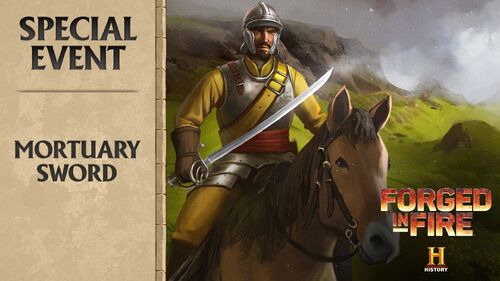 Forged in Fire: Mortuary Sword is a 5-days event. There is a total of 5 steps.The 5 steps tell that you need to destroy enemy defender spawning buildings such as Garrisons, Stables, Tank Depots, Bunker, and the Colosseum in Multiplayer Battle and World War. This event started from 14:00 UTC 10/04/2018 until 14:00 UTC 10/09/2018.

Forged in Fire is an original competition series on the History Channel. The show is hosted by weapons expert and U.S. Army and Air Force veteran Wil Willis. Each episode tests four of the nation’s most skilled bladesmiths as they craft history’s most iconic weapons. The Mortuary Sword, which aired on October 3, 2018, features the iconic Mortuary Sword. More information regarding the Ironside Cavalry:

The Ironside Cavalry were formed by Oliver Cromwell in the 17th century during the English Civil War. They were armored in the traditional harquebusier, which was common amongst cavalry in Western Europe. As a more lightly armored cavalry, they played an important role in siege warfare by escorting supply convoys and foraging parties. While the 16th and 17th centuries changed the weaponry of cavalry, the sword was still carried as a symbol. Using a sword while on horseback required training, as the Ironside had to reach over their left arm to draw the sword since the bridle arm was needed to control the horse. It has been said that cavalry horses could be easily identified as they were often missing part of an ear.

How strong is your siege warfare? 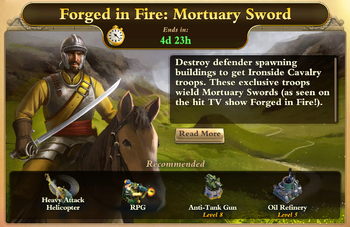 Retrieved from "https://dominations.fandom.com/wiki/Forged_in_Fire:_Mortuary_Sword?oldid=42462"
Community content is available under CC-BY-SA unless otherwise noted.