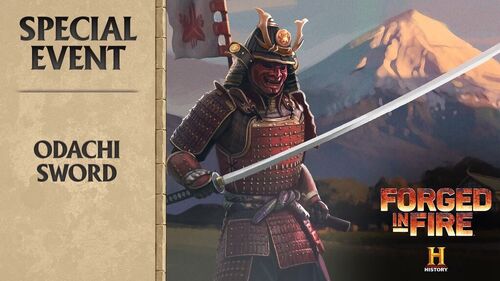 Forged in Fire is an original competition series on the History Channel. The show is hosted by weapons expert and U.S. Army and Air Force veteran Wil Willis. Each episode tests four of the nation’s most skilled bladesmiths as they craft history’s most iconic weapons. The Odachi, which aired on October 31, 2018, features the iconic Odachi sword.

More information regarding the Kensei:

The samurai of feudal Japan used a variety of weapons. Amongst the sword variants used was the odachi, a massive weapon reaching up to five feet in length. Samurai had to carry the odachi into battle by hand or on their backs, as the sword was too long to carry on the waist like normal. Often used a a ceremonial object or an infantry sword, the odachi was useful against enemies on foot and on horseback.

How strong are your attacking forces? 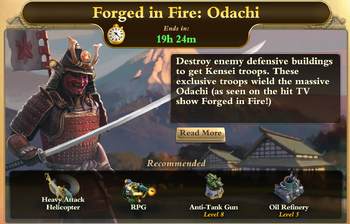 Retrieved from "https://dominations.fandom.com/wiki/Forged_in_Fire:_Odachi?oldid=43299"
Community content is available under CC-BY-SA unless otherwise noted.