“These troops have increased range, damage, and health compared to normal archers. Their long reload times are well worth the wait, as each bolt deals incredible damage against enemy defenders.”

The French Arbalestier is an Event Troop from the Forged in Fire: Steel Crossbow Event that can be used as Troop Tactics. 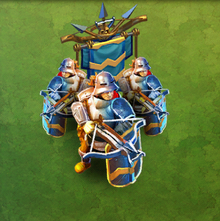 During the French Medieval period, crossbows were fairly common among soldiers, mercenaries, and commoners. Later “heavy” models of the crossbow were larger and used steel prods which allowed for much greater firing force. The French called these kinds of crossbow Arbalests, a term that comes from the Roman words for bow and ballista. These crossbows would often require specially made devices to ready their bolts. A well-trained crossbowman would only be able to fire two bolts per minute. To protect themselves while reloading, they would plant a large shield in the ground for cover.

An army of infantry could become fully skilled crossbowmen in a matter of weeks compared to the decades of training required for an equally skilled bowman. This, coupled with the power to pierce a knight’s plate and chain armor from a large distance, made knights and nobles view heavy crossbows with both disgust and fear.

Retrieved from "https://dominations.fandom.com/wiki/French_Arbalestier?oldid=44425"
Community content is available under CC-BY-SA unless otherwise noted.