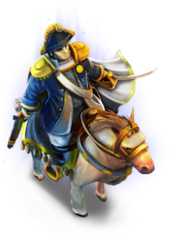 “Generals have a commanding presence on the battlefield, able to both deal and take a lot of damage. They are particularly powerful when fighting other generals.”

Generals have higher hit points than other units in the game and move quicker, but have lower damage output. Generals target the nearest enemy and do 6x damage when fighting other Generals.

Generals are used differently compared to other units.

Generals can be upgraded at the Blacksmith. While being upgraded, they cannot be activated.

Depending on the level of your Castle / Fort, the following Generals are available:

General Chest might contains Lady Death, though she don't have bonus DPS against Generals.

Training Cost for the 3rd General is double the 2nd General.

The first ten level of Food upgrade cost is only for Alexander, Cleopatra, Joan of Arc, Nobunaga and Napoleon. Other Generals, use Oil. After Level 10, all of the General upgrade cost use Oil.

Generals are very powerful troops that can be very effective in battle. However, they take a long time to heal if heavily damaged, so they should be saved for important battles or only used when they will take light damage.

Ballista Towers do very high damage and you should avoid them with Generals.

Leadership is a level 5 Technology available at the Library. Researching Leadership improves the effectiveness of Generals as follows:

Command is a level 8 Technology available at the Library. Researching Command affects Generals as follows:

The research of Suleiman the Magnificent in the University confers the following bonus to Generals:

The research of Catherine the Great in the University confers the following bonus to Generals:

The research of Hannibal Barca in the University confers the following bonus to Generals:

The research of Sun Tzu in the University confers the following bonuses to the Sun Tzu:

The Versailles wonder confers these bonuses to the Generals: