The Humvee is an Event Troop from Events, Chest, or Sales that can be used as Troop Tactics. 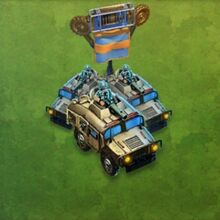 The High Mobility Multi-Purpose Wheeled Vehicle or HMMWV, better known as the Humvee was commissioned in 1979 to replace the Jeep as the U.S. Army's generalist workhorse. The model entered production in 1983 and first appeared on the battlefield six years later during the American invasion of Panama. Its prominent place in media coverage of the Gulf War created demand for a civilian version, leading AM General to produce the Hummer for consumer purchase.

Though the troops were hesitant to replace their old Jeeps, the Humvee's versatility and toughness soon won them over. The new vehicle could be paradropped, handle any terrain, and support various armaments like machine guns and anti-tank missiles. However, the design eventually reached its limits during the Iraq War. Never intended to withstand heavy damage, its light armor left it vulnerable to Iraqi insurgents' IEDS. The Army therefore began replacing its Humvee fleet with new Joint Light Tactical Vehicles built to provide superior protection.

Retrieved from "https://dominations.fandom.com/wiki/Humvee?oldid=48825"
Community content is available under CC-BY-SA unless otherwise noted.