"IA" redirects here. For the other age with this abbreviation, see Iron Age.

The Industrial Age is the ninth age in DomiNations and was released on 28 July 2015. It is obtained by paying 4,500,000 gold in the Town Center, and takes 10 days to complete. This age is succeeded by the Global Age and is preceded by the Enlightenment Age. It was the first age to be added to the game since its initial release.

The Industrial Age is a period of time of history of modern warfare, machinery, industry, inventions, colonization, science, modernization, upheavals, capitalization, and new resources. This age lasted from the 1850 AD/CE to 1920 AD/CE. The Industrial Age revolve around the Industrial Revolution, which begun in the Enlightenment Age in Great Britain. In the Industrial Age, machines had replaced production using hands. New fuels were popularized such as coal, oil, and famously; steam. These fuels are used for new types of transportation such as steamboats and trains. Factories are built to support the textile industry; the most common industry. Canals, railways, and roads were built to help transportation. Population increased dramatically and the economic system of capitalism has emerged. Many countries have experienced economic growth from this new system. Africa and Asia became modernized from colonization or treaties such as South Africa and Japan. China moved away from monarchy to democracy and began to modernize immediately. New inventions were created such as the telegraph, modernized light bulbs, the biplane (the first modern airplane), telephone, photography, steam engines, trains, bicycles, and cars. Biology had become advanced through Charles Darwin and Chemistry had become advanced and popularized. However, the Industrial Age had its disadvantages too. Working conditions were poor such as child labor and workers lived in squalor. Capitalism was disliked by philosophers and Socialism was created. Colonization was still harsh and many of the most famous wars occurred. The United Kingdom had to deal with Boers and Zulus in the Anglo-Zulu War and the Boer Wars. The Boxer Rebellion had been countered by the Western powers and Japan in China. The federal United States had to fight the Confederate States in the American Civil War. France tried to stop the Germans from growing too powerful but failed completely in the Franco-Prussian War. Russia and its weak and oppressive government were taken over by Communist revolutionaries. And one of the most famous wars of all; World War I. World War I revolves around the assassination of an Austro-Hungarian archduke in Serbia. The belligerents were the Central Powers consisting of Germany, Austria-Hungary, Bulgaria, and the Ottoman Empire and the Allied Powers consisted of the United Kingdom, France, the United States, Japan, and Russia (Russia went to peace after Communist takeover). Tanks were created and built. New guns such as machine guns and anti-tank rifles were built. Biplanes, triplanes, and bombers were produced dramatically. World War I had about a staggering forty-million casualties and empires had declined then. The mighty British Empire had weakened and the Austro-Hungarian and Ottoman Empires had collapsed and dissolved. The Global Age had begun after the upheaval of World War I.

After advancing to the Industrial Age, players are given a new set of buildings to build, technologies to research, and units to create. Buildings that are available at the Industrial Age are the air defense (new), the airstrip (new), the bunker (new), the caltrops, the spike trap, a set of roads, and a set of walls. In the blacksmith, you can upgrade the the fusilier (junker if Germans, ashigaru if Japanese, Praetorian Fusilier if Romans) to the shock infantry (Wehrmacht if Germans, Shizoku if Japanese, Alpini if Romans), the musketeer (royal yeomanry if British, fire dragon if Chinese) to the rifleman (Black Watch if British, Manchu Rifleman if Chinese), the carabineer raider to the motorcycle raider, the cuirassier (hussar if French, stradioti if Greeks) to the tank (St. Chamond if French, Companion Tank if Greeks), the veteran wall sapper to the engineer, and the supply train to the supply truck. From the Airstrip, you can also build biplanes and zeppelins. In addition, players can also construct wonders in the Industrial Age to give a bonus to help the player. The choices are the Brandenburg Gate, the Eiffel Tower, the Kremlin, and the Statue of Liberty.

By upgrading university, it is possible to complete leaders Emperor Moctezuma and Hannibal Barca. 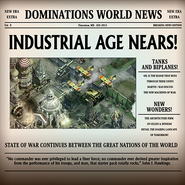 Newspaper announcing the release of the Industrial Age.

Analysis of the Industrial Age.

A North European city in the Industrial Age.

The Kremlin surrounded by defenses.

A North European city surrounding the Eiffel Tower in the Industrial Age.

The new type of Industrial Age units is the Aircraft; can be used to destroy units and buildings from above.

New wonders of the world. Shown in order from left to right; Kremlin, Statue of Liberty, Brandenburg Gate, and the Eiffel Tower.