“Like their jaguar namesake, these Aztec troops move fast and strike hard. These troops are good against all target and have no particular preference. The biggest threats they face are high-damage defenses like Spike Trap and Ballista Tower.”

The Jaguar Warrior is an Event Troop from Aztec Rituals Events, Chest, or Sales that can be used as Troop Tactics. It can also be trained temporary in Aztec Temple Event Buildings and be used as normal troops. It is stronger, more versatile, and faster than common Heavy Infantry. 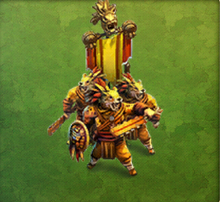 The jaguar, representing strength and power, was an important animal in the religions of pre-Colombian Mesoamerican cultures. Dressed in skins of their namesake predator, Jaguar Warrior represented the highest echelon of militarized Aztec society. Demonstrating prowess in battle by the capture of enemies was one of the few ways for commoners to advance to noble status.

The captives were often sacrificed to the gods in elaborate rituals and many allegedly welcomed their role as messengers to the heavens in these ceremonies. Jaguar Warriors were armed with a sword made of wood and obsidian and carried a shield decorated with feathers and believed to have magical properties.

Retrieved from "https://dominations.fandom.com/wiki/Jaguar_Warrior?oldid=46346"
Community content is available under CC-BY-SA unless otherwise noted.