“These elite Ottoman heavy infantry excel at destroying enemy buildings. Their strong faith grants them 2x combat bonuses from Blessings and War Coalitions. These include the Armor, Weapon and Medic Blessings and the Aztec, Maori and Cherokee Coalitions.”

The Janissary is an Event Troop from Guns of the Sultan Events, Chest, or Sales that can be used as Troop Tactics. 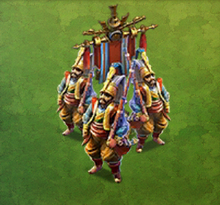 The Janissaries were some of the most feared soldiers in the world during their heyday. As elite infantry, they were held as reserves and commited only at critical moments. Ottoman generals relied on them to charge into breached fortifications and excute decisive flanking maneuvers against engaged enemies.

Eventually, their combat effectiveness waned and they became better known for palace coups than military victories. Unwilling to change their traditions or loosen their grip on Ottoman politics, they violently resisted multiple attempts at reform. Their power was finally broken in 1826 during the so-called 'Auspicious Incident' when they rebelled against Mahmud II for creating a modern army. The sultan's forces surrounded the Janissaries barracks with artillery and destroyed them.

Retrieved from "https://dominations.fandom.com/wiki/Janissary?oldid=46404"
Community content is available under CC-BY-SA unless otherwise noted.