“Lady Death eliminates defenders from extreme range with her sniper rifle. She sneaks past shooting buildings but is vulnerable to traps and defenders.”

The Lady Death is an Event Troop from Events, Chest or Sales that can be used as Troop Tactics. 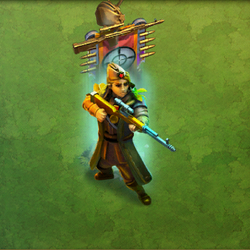 Lyudrnila Pavlichenko was a Ukrainian sniper for the Soviet Red Army during WWII. She accumulated 309 confirmed kills during her service, earning her the nickname 'Lady Death'. 36 of those were enemy snipers who Pavlichenko gunned down while performing the extremely dangerous task of counter-sniping. Pavlichenko became so well known that enemy German soldiers offered her bribes - which quickly deteriorated into threats - to change sides.

Pavlichenko ended her sniping career as a major in the army with the title of 'Hero of the Soviet Union' - the USSR’s highest distinction. However, her fight did not stop there. In 1942 she toured the United States where reporters questioned her lack of makeup and the length of her skirt. Pavlichenko, annoyed by the irrelevant questions, told the crowd to stop hiding behind her and instead support opening a second front in Europe.

Retrieved from "https://dominations.fandom.com/wiki/Lady_Death?oldid=48109"
Community content is available under CC-BY-SA unless otherwise noted.