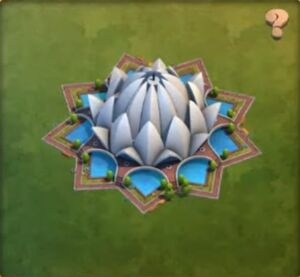 “Grants a bonus to resource generation once per day. These effects are stronger under a Peace Treaty!”

The Lotus Temple is one of four Wonders unlocked in the Space Age.

The Lotus Temple is one of less than a dozen Houses of Worship of the Baha'i faith worldwide. Located in New Delhi, India, it was designed by Iranian architect Fariborz Sahba and completed in 1986. The marble building and surrounding complex exhibit nine-way symmetry, as Baha'i adherents consider nine to be a holy number. The temple's name derives from its visual similarity to a lotus flower, which is sacred to many Indian religious traditions.

The cavernous interior has a bright and open atmosphere due to the absence of columns or beams. There are no permanent altars to particular gods within. Anyone over the age of 12 may enter for free and pray according to their own beliefs. Musical instruments and public sermons are forbidden, but worshippers are permitted to chant or read aloud from scripture. This is all in accordance with the tenets of the Baha'i faith, which emphasizes the unity of all peoples and religions.

Retrieved from "https://dominations.fandom.com/wiki/Lotus_Temple?oldid=54614"
Community content is available under CC-BY-SA unless otherwise noted.