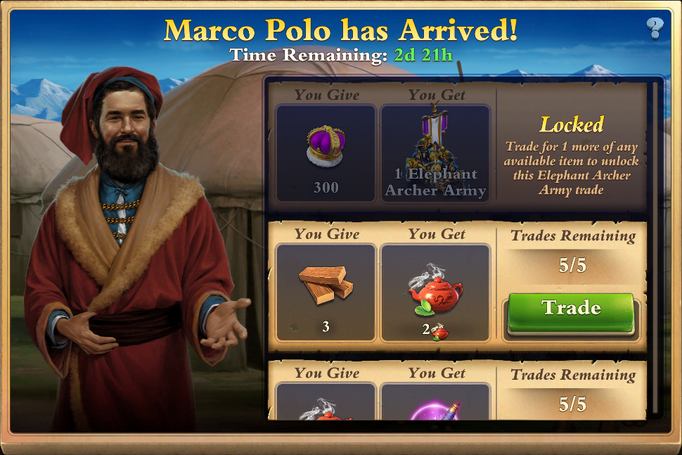 "The seeds of Marco Polo's legendary journey to Asia were planted when his father Niccolo and uncle Maffeo, who were Venetian jewel merchants, travelled to the court of Kublai Khan in China. The Yuan emperor enjoyed their company and eventually sent them west to bring back holy oil and one hundred learned Christians. They reached home in 1269, where Niccolo met his 15-year old son for the first time. The Polos set out eastward again in 1271 with young Marco as well as the requested holy oil(but only two friars, who soon turned back).

After a four-year journey along the Silk Road, they reached the imperial summer quarters at Xanadu. Kublai took an immediate liking to Marco. During his 17-year stay, the emperor assigned him various posts and missions around the empire and provided him with a golden tablet that ensured safe travel and lodging. While the Polos were fond of China, they also became homesick and began to fear for their safety if the aging Kublai were to die. He reluctantly let them leave on the condition they escort a Mongol princess to Persia.

The Polos made it back to Venice in 1295. Three years later, Marco was captured in a naval battle against Genoa. He dictated an account of his travels to an Arthurian romance writer named Rustichello while in prison. The book became famous and inspired future explorers like Henry the Navigator and Christopher Columbus. Though its veracity was questioned from the start, most scholars now accept that it was largely and honest telling. Marco himself refused to admit to any falsehood, claiming on his deathbed 'I have not told half of what I saw.'"