High damage against buildings and tanks

“These elite, heavy-hitting troops are effective at tearing down enemy buildings.”

The Marine is the special unit for the Americans unlocked in the Embassy and can only be used to attack in world wars.

The Marine can also be an Event Troop from Events, Chest, or Sales that can be used as Troop Tactics. 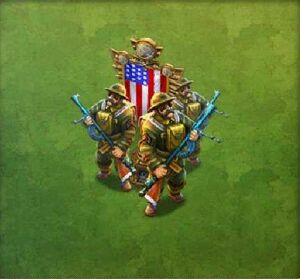 Marines are infantry who specialize in amphibious warfare. In ancient navies, marines were stationed on ships to engage in hand-to-hand boarding operations, and also to keep the crew in line. Their role became increasingly important as advances in naval technology enabled nations to fight wars on a global scale. Dutch and British marines captured Gibraltar in 1704 and withstood repeated sieges, leading to Britain's permanent control over the territory. The United States Marine Corps traces its roots back to the Continental Marines created during the American Revolution. U.S. Marines led the way in the Pacific Theater of World War II, spearheading assaults on Guadalcanal, Iwo Jima, Okinawa and more.

Retrieved from "https://dominations.fandom.com/wiki/Marine?oldid=46721"
Community content is available under CC-BY-SA unless otherwise noted.