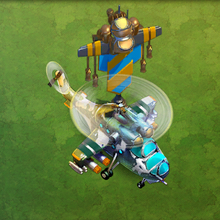 The Mil Mi-24 is a Russian gunship that uniquely served as both an attack helicopter as well as an armored troop transport. The Mil Mi-24 was officially designated 'Hind' by NATO, although it earned many nicknames over the years such as the 'flying tank'. In spite of its heavy armor and massive size, the Mil Mi-24 was incredibly fast. It was also one of the most heavily armed attack helicopters of its time with six external hardpoints for weapons and multiple Gatling guns for both the pilot and passengers to use. Its heavy armaments coupled with the armed troops it carried onto the battlefield have made the Mil Mi-24 a powerful helicopter that is still used by many nations today.

The Russian Airborne Forces being transported by the Mil Mi-24 were among the Soviet military's most elite soldiers. These paratroopers were highly trained and easily recognizable due to their signature blue colored berets. The 'blue berets' would parachute into battle wielding a wide variety of weaponry, from the standard AK-74 assault rifles to sniper rifles, flamethrowers, portable surface-to-air missiles, rocket launchers, and occasionally even with armored vehicles.

Retrieved from "https://dominations.fandom.com/wiki/Mil_Mi-24?oldid=50360"
Community content is available under CC-BY-SA unless otherwise noted.