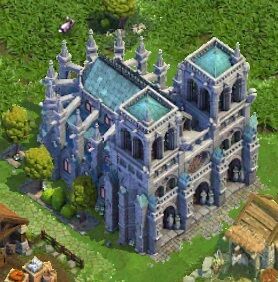 “Reduces the cost of Library technologies and unit upgrades. Cannot be attacked. Once a day you may collect bonus gold.”

The Notre Dame is one of four wonders unlocked in the Classical Age.

Constructed on an island in the Seine River in the center of Paris, France, the 'Notre-Dame de Paris' is a Roman-Catholic cathedral and one of the most beautiful buildings in the world. Constructed over some 200 years beginning in the 12th century, the enormous building is known for its innovative flying buttresses, remarkable statuary and beautiful stained glass. Despite attacks by angry Huguenots, ill-conceived modernization attempts, and temporary conversion into a 'Temple to the Cult of Reason' by French-Revolution atheists - not to mention two World Wars - the Cathedral survives today, guarded by a host of gloriously ugly gargoyles and perhaps the spirit of France herself.

Retrieved from "https://dominations.fandom.com/wiki/Notre_Dame?oldid=52415"
Community content is available under CC-BY-SA unless otherwise noted.