Cannot shoot over walls, low damage against walls and buildings

“These cunning ninja sneak by defensive buildings and attack groups of enemy troops with their shurikens!”

The Oni Ninja is an Event Troop from the Ninja Dojo Event Building, Events, Chest or Sales that can be used as Troop Tactics. 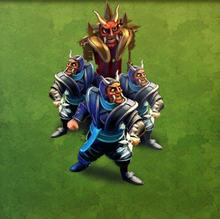 Ninja were soldiers and mercenaries in feudal Japan who were typically hired by daimyos to carry out stealth missions. Japanese folklore states that the first ninja descended from a yokai that was half-man and half-crow. Yokai are supernatural monsters or demons that are known to shapeshift and terrorize the living. The practice of wearing yokai masks, like oni masks, has been a Japanese tradition since the Jomon period. Today, oni masks are commonly worn during festivals, where they are used to frighten children and ward off evil spirits.

Retrieved from "https://dominations.fandom.com/wiki/Oni_Ninja?oldid=46689"
Community content is available under CC-BY-SA unless otherwise noted.