“This notorious gunslinger engages in ranged combat with his dual weapons.”

The Outlaw is an Event Troop from the Saloon Event Building, Events, Chest or Sales that can be used as Troop Tactics. 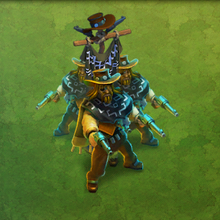 The concept of people living outside the legal bounds of society has been around since ancient times. Since outlaws were independent of the law, they were not afforded any of the law's protections. Therefore anyone could kill or persecute them with impunity.

During the nineteenth century, the American frontier became infamous due to the theft, violence, and gambling often perpetrated by outlaws. There were many famous men and women outlaws during this Wild West period including Jesse James, Bandit Queen Belle Starr, Pearl Hart, and Billy the Kid.

Retrieved from "https://dominations.fandom.com/wiki/Outlaw?oldid=48081"
Community content is available under CC-BY-SA unless otherwise noted.