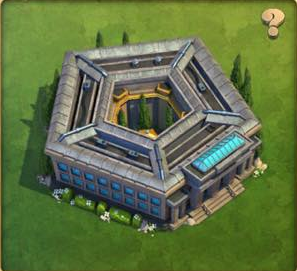 “Airstrip troops train 20% faster. Assign an extra General to the Pentagon for defense.”

The Pentagon is one of four wonders unlocked in the Atomic Age.

The Pentagon was designed by American architect George Bergstrom (1876–1955), and built by general contractor John McShain of Philadelphia. Ground was broken for construction on September 11, 1941, and the building was dedicated on January 15, 1943. General Brehon Somervell provided the major motive power behind the project;[4] Colonel Leslie Groves was responsible for overseeing the project for the U.S. Army.

Retrieved from "https://dominations.fandom.com/wiki/Pentagon?oldid=54600"
Community content is available under CC-BY-SA unless otherwise noted.