“Scans a target, causing eneny troops, buildings, and walls within the area to take banus damage from all sources! To deploy your aircrafi, tap any building or unit in the eneny's base. When they've finished their run, they may be redeployed.”

Recons are the fourth type of air unit to use in the game Dominations. They're unlocked by constructing the Airstrip level 8 in the Digital Age.

Recons can't damage any enemy. Its role is to scan the enemy, to make them takes more damage for certain period of time by other units.

To deploy a Recons, tap any building or unit in the enemy's base. When they've finished their scan, they take a few seconds to refuel, and when done, go to your unit bar for redeployment.

Recons take up 2 space in the Airstrip.

Strength: Cause enemy troops, buildings, and walls to take bonus damage from all sources. 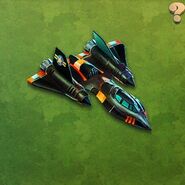 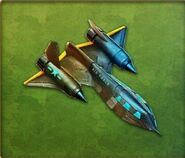 Supersonic Recon
Add a photo to this gallery

The Aviation Technology at the Library confers the following bonuses to the Recons:

The Reconnaissance Aircraft Technology at the Library confers the following bonuses to the Recons:

Amelia Earhart at the University confers these bonuses to the Recons:

The Statue of Liberty wonder confers these bonuses to the Recons:

Retrieved from "https://dominations.fandom.com/wiki/Recons?oldid=56531"
Community content is available under CC-BY-SA unless otherwise noted.