Retiarius Gladiator is an event troops from Events, Chest or Sales that can be used as Troop Tactics. It also can be trained at event building Ludus Magnus to be used as Troops. 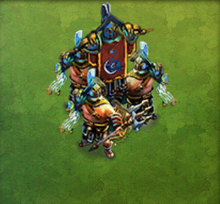 Roman gladiators were separed into distinct types according to their equipment. The fisherman-themed retiarius or 'net-man' is perhaps the most recognizable today. Associated with the Roman God Neptune, retiarii wielded a trident as their main weapon, a net for ensnaring foes, and a dagger as a last resort. The only armor they wore covered their left arm and shoulder, making them the least protected of all gladiators. The usual opponent of the retiarius was the secutor or 'pursuer' whose fin-crested helmet resembled the head of a fish. As such, their combat was a stylized version of the struggle between a fisherman and his catch.

Retrieved from "https://dominations.fandom.com/wiki/Retiarius_Gladiator?oldid=48097"
Community content is available under CC-BY-SA unless otherwise noted.