“The Sepecat Jaguar flies faster and hits harder than your average fighter, all while suppressing enemy defenses.”

The Sepecat Jaguar is an Event Troop from Events, Chest or Sales that can be used as Troop Tactics. They are excellent for taking down hordes of enemy units such as are Heavy Infantry and Heavy Cavalry. 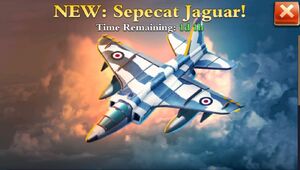 The United Kingdom and France worked together in the 1960s to design a jet strike fighter capable of short take-off and landing. A British aviation firm teamed up with a French one to manufacture the airframe under the name SEPECAT, while another such partnership produced the Adour engines. Britain's Royal Air Force initially sought a mere trainer aircraft, but they ended up purchasing far more of the combat-ready strike fighter variant.

The first flight of the Jaguar came in 1968. It entered service in France five years later and Britain the year after that. The model would not see most of its action until the 1990s when it was deployed in the Gulf War and Yugoslav Wars before its producers phased it out. Jaguars were also exported to a few other nations including Israel, Nigeria, Oman, and Ecuador. They became a particular favorite of the Indian Air Force, who flew them during the 1999 Kargil War with Pakistan and have continued to turn out upgraded versions ever since.

Retrieved from "https://dominations.fandom.com/wiki/Sepecat_Jaguar?oldid=52733"
Community content is available under CC-BY-SA unless otherwise noted.