Shaolin Monk is an event troops from Events, Chest or Sales. that can be used as Troop Tactics. 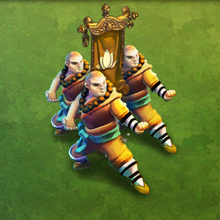 A Buddhist monk from India named Bodhidharma traveled to the Shaolin Temple during the 5th century CE to spread Chan Buddhism, a form of Buddhism with an emphasis on meditation. He observed that the Shaolin Monks lacked the stamina to perform basic meditation techniques. To train the monks, Bodhidharma introduced a set of exercises that would form the foundation for Shaolin Kung Fu. The monks later used Shaolin Kung Fu to defend the temple and save the future Tang Dynasty emperor, Li Shimin, in 618 CE. The Shaolin Temple grew famous for the great feats of its warrior monks. Despite their mastery of martial arts, the Shaolin Monks were bound by a code of ethics that promoted compassion and peace over shows of force.

Retrieved from "https://dominations.fandom.com/wiki/Shaolin_Monk?oldid=48151"
Community content is available under CC-BY-SA unless otherwise noted.