Immune to traps; Disarms traps it drives over

“Uses a mine flail to unearth and disarm traps that threaten other ground forces. Doesn't disarm S.A.M. Batteries.”

Sherman Crab Tank is an event troops from Events, Chest or Sales that can be used as Troop Tactics. 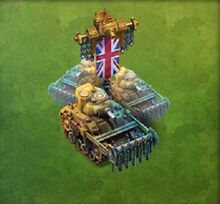 It is a type of Tank can be deployed from C-130 Transport.

During World War II, British forces researched ways to improve upon the previous mine-flail design created by South African Major A.S.J. du Toit. This South African mine flail system was used to purposefully detonate mines with long, heavy chains that were mounted on the hulls of existing tanks. Engineers in Britain fine-tuned the mine flail design into a new system named the Crab, which utilized around forty-three individual strands of chain. The American M4 Sherman medium tank was widely used with the Crab design. This model was produced by the thousands, and although its offensive capabilities were not explored, it served its purpose by allowing the allies to handle mine fields before battles truly commenced. The Sherman Crab tank became the most utilized mine-flail tank of World War II.

Retrieved from "https://dominations.fandom.com/wiki/Sherman_Crab_Tank?oldid=48459"
Community content is available under CC-BY-SA unless otherwise noted.